She is just cute

I just love this sweet face! 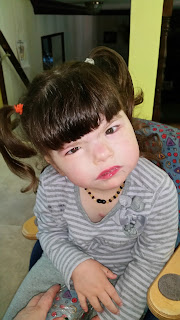 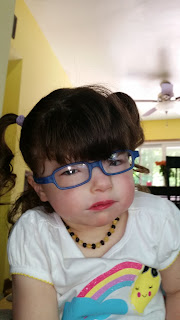 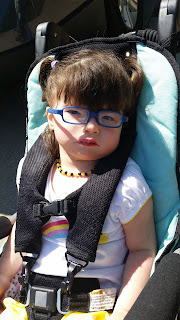 I can't help but take pictures of her (and her sisters) ALL the time!  I just can't get enough of them.  Sadie is looking so grown up these days.  And even though she may not look thrilled to be having her picture taken (again), she really is.  She always smiles right before I take it (because my camera is too slow to take the pic), or she smiles right after because she thinks she is funny and knows she was supposed to smile for the picture.  Sadie is silly that way. 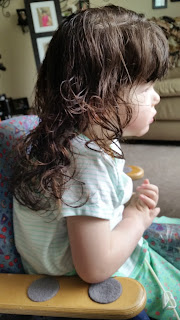 Look how long and curly her hair is getting?!  Even though she hates to have it brushed, I can't even think about cutting it off.

A couple of May activites 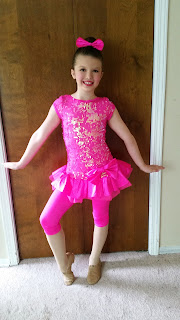 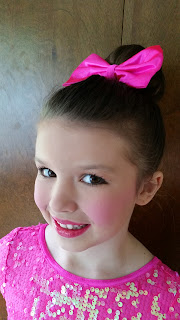 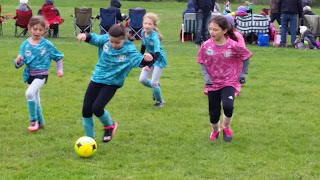 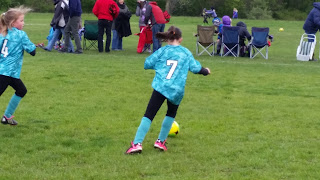 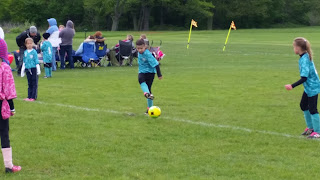 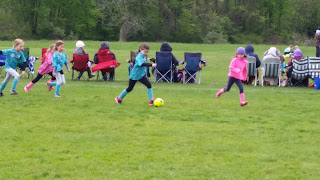 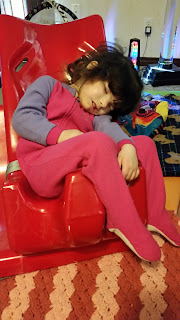 Ohhhh, this little girl.  How can she be sick again? High fever 104.5, no other symptoms except that she is super tired, which always happens when she has a fever.  She was completely fine yesterday, no illness in sight.  That morning she slept in until 11, a little odd but maybe she is growing?  However, her sister also informed me that her throat hurt.  When I looked in her throat it was flaming red. I took her to the Dr to have her checked for strep and while I was there the Dr noticed Sadie wasn't looking so hot.  With the fact that Aubrie just tested positive for strep and Sadie just so happened to get sick the same day, he decided to treat her for strep also.  I'm not completely convinced that it was strep, however, the antibiotic perked her up and she was off and "running" within a few days.  Maybe it was strep? Maybe it was something else.  Not sure, but antibiotics are definitely Sadie's friends.  When she gets sick and they think it's a virus and hold off on the antibiotics her illnesses last for weeks.  But as soon as we start her on an antibiotic she perks up within a day or two. 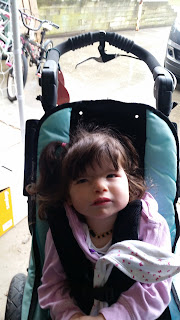 Heading back to school a few days later. Happy and healthy!

Maybe we figured it out

Tis the season for appointments, falalalalalalalala!  They always seem to fall together in about a months span. No matter how hard I try to space them out, some how they all get bunched together.  In the past month we have seen the Eye Dr, Dentist, GI Dr , Neurodevelopment Dr and then coming up in the next week or so she is seeing , the Endocrinologist, Pulmonologist, Orthopedist and having an ultrasound and sleep study.  Yep, just a few appts.  BUT that's ok, it's helping to keep my daughter healthy, happy, and progressing.  And to me that's all that counts.
As I mentioned one of the appointments was with her neurodevelopment Dr. As I was chatting with her about this pain issue, she was also assessing her.  Again she really didn't come up with anything that struck her as odd or off about Sadie.  Nothing seemed to hurt as she was pushing on her belly (or pushing on anything for that matter). She also was at a dead end with this pain issue when she decided she wanted to check a urine sample to see if she had an infection, so we caught a sample and I took it too the the lab after her appoinment.  Expecting it to be normal cause she showed no symptoms of a UTI, I totally forgot about dropping the sample off.  Later that evening I get a call from the Dr's nurse saying that the ua was indicating that she had an infection?  WHAT!?  Seriously? I would have never guessed in a million years that she had an UTI. Sure enough, a couple days later the Dr's office called me again and said that the culture grew bacteria.
The Dr herself called me to tell me the results.  She also went on to say that since we were unsure how long she has had this infection, and she has been in pain since January, and the fact that her BP was slightly higher then her normal,  she wanted to get an ultrasound of her kidney's and bladder to make sure there was no damage from the infection.  Come on!  This is the last thing that this child needs.
Good news!  A few weeks later we went to the ultrasound and it was negative, no damage!  Yay!!  And the pain seems to have stopped.  Yay!!  And the repeat UA was negative.  Yay!!  My poor baby had a UTI and was having bladder spasms.  That's what was causing all the pain. My heart broke a little bit wishing that it was caught earlier.  Those are the moments that I wish that Sadie could have talked.
No comments:

And they're off and running!

Chloe and Aubrie ran their first races.  Chloe's was a 5k and Aubrie's was 1 mile. Not sure where they got their love of running because it wasn't from me or their dad. But they love it and they are good at it.  So proud of these 2 girls! 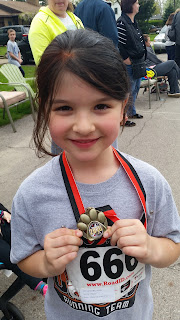 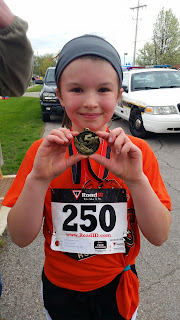 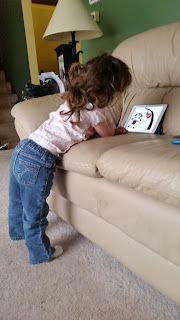 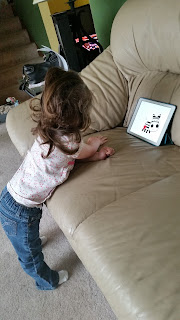 "I think I'll just stand here leaning on the coach and watch my ipad for awhile.  These zebra's and monkeys are pretty funny". 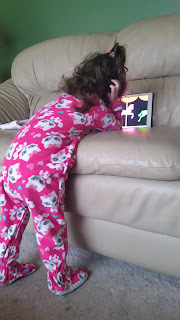 Sadie acts like this is so natural and second nature. Like she has always been doing this. 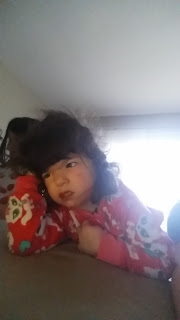 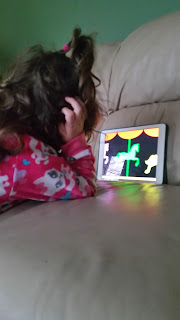 In March Sadie got a taste of what it was like to stand.  Since then this little girl likes to practice standing.  She is not able to get into the position by herself yet.  I believe that eventually that will happen, but first she needs to overcome her tactile issues and touch things.  In the meantime, this is a beautiful sight and I will take this moment and treasure it.

4 years ago to the day was Sadie's first surgery. It was for her feeding tube placement, nissen fundoplication, and a hiatal hernia repair (which was a surprise to everyone). I remember being scared, but so thankful that day.  Scared because it was the first time she was going to be under anesthesia and we had no idea how she was going to react to it.  And thankful because finally we were going to get this tube and tape off of my babies face.  It was almost like seeing my babies face for the first time.  I could really study it and get to know every little smirk, smile, dimple, crinkle of the nose.  I could stare at her for hours without being worried about putting a tube back down her nose so that she could eat.   I also remember being so thankful that we live in a generation were a feeding tube is able to be placed.  It broke my heart to think about all those babies way back when that couldn't suck and ended up starving to death and how those parents had to have felt.
Sadie handled the surgery great.  No complications and not many signs of pain.  The only time that things got a little crazy was the morning after her surgery. It was about 6am and Sadie started fussing and then the fussing turned into screaming and then all her vitals were going all wacky.  The next thing I knew the entire crew flew into her room; dr's, interns, residents, nurses, nurse techs, respiratory therapists, lab techs.  Orders were flying left and right, vitals were being taken and repeated again.  I was trying to figure out what I missed, I didn't call anyone in there.  Finally, I realized that they were all freaking because of the sudden change in her vitals.  Just as I realized that this was the issue, her surgeon walked over to talk to me about what was going on.  I let him talk and then I said "I think she is just hungry, she hasn't eaten in 30 hours.  His jaw dropped, he turned and asked everyone that was in the room why she hadn't been fed yet and no one had a good answer.  He said loudly "Feed the child"!  He then apologized to me and to Sadie and walked out.  Needless to say her nurse returned in minutes with her food.  There was not even 5mls in her stomach and she settled right down and all her vitals started to return to her normal.  Amazing what food can do for a human , huh?

Oh yes, you shaped me first inside, then out;
you formed me in my mother’s womb.
I thank you, High God—you’re breathtaking!
Body and soul, I am marvelously made!
I worship in adoration—what a creation!
You know me inside and out,you know every bone in my body;
You know exactly how I was made, bit by bit,how I was sculpted from nothing into something.
Like an open book, you watched me grow from conception to birth;
all the stages of my life were spread out before you,
The days of my life all prepared before I’d even lived one day. 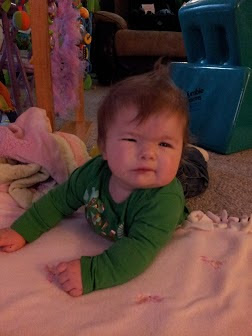 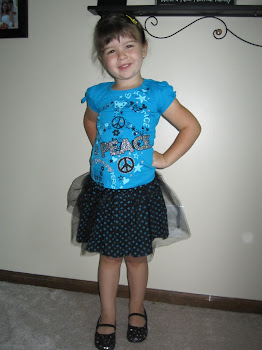 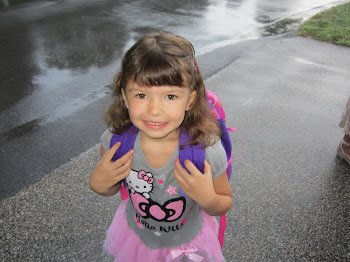 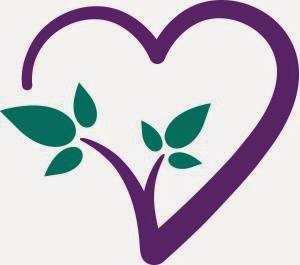 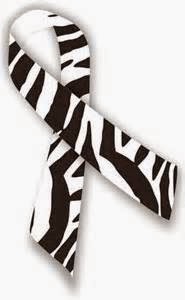 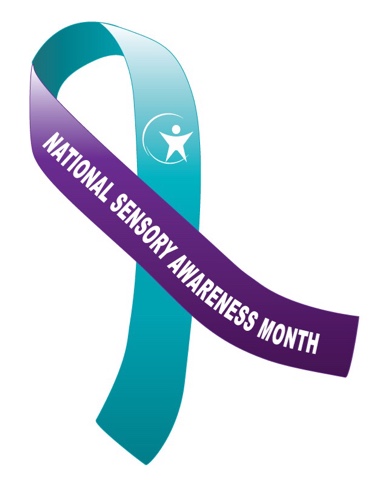 I love comments! Please leave me one or contact me by e mail! tammi.vanderwal13@gmail.com